William Hill US has announced it is purchasing the sportsbook assets of  CG Technology, including its Nevada and Bahamas operations.

The British-based bookmaker already operates 113 retail sportsbooks in the state but this purchase, which includes some of the city’s most luxurious properties, located on or near The Strip, is highly significant in terms of expanding its footprint in the Silver State.

Its brand will now debut in the following casinos:

CG’s one-off operation at Atlantis Resort on Paradise Island, Bahamas, is also part of the sale, with William Hill set to provide a betting platform and risk management consulting at the luxury spot.

“We are pleased to have reached this agreement. This will allow us to expand our Las Vegas footprint to several marquee resorts,” said Joe Asher, CEO of William Hill US. “We look forward to working with our new casino partners and transitioning CG Technology’s retail and mobile customers to our award-winning offering.”

Parikshat Khanna, CEO of CG Technology, also commented: “We are happy to reach an agreement for the sale of the race and sports book assets of CG Technology to William Hill and look forward to a seamless transition for our loyal casino partners and customers.”

The two parties expect the deal to close in the first half of 2020, subject to regulatory approval from both jurisdictions.

Hill’s purchase of CG Technology is unlikely to be the company’s last acquisition in Nevada.

Indeed, the first half of 2020 could see the company take over Caesars Sportsbook operations in the state and elsewhere in the country.

That could come about as a result of a merger between Eldorado Resorts, which owns a 20% share of William Hill, and Caesars Entertainment. Depending on regulatory approval, the two companies will become one and Hills is already planning for it.

“We are preparing to bring operation of the existing Caesars sportsbooks into the William Hill network, subject to regulatory approval,” said a spokesman in a recent trading update.

Such a merger would make William Hill the dominant retail sportsbook operator on the Vegas Strip with 15 sportsbooks, seven more than the next largest, MGM Resorts. 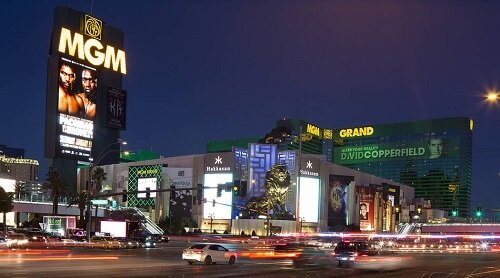 An industry leader with 85 years of history in sports betting, William Hill moved into the U.S. market in 2012, when setting up shop in Nevada.

In addition to its numerous retail operations, the company can boast one of the state’s leading mobile apps. Read more on the William Hill Sportsbook app here

In New Jersey, it operates at Monmouth Park Racetrack, Ocean Resort Casino, Tropicana Atlantic City, and online via its mobile app. In October, Nevada and New Jersey combined for more than $1 billion in sports betting handle.

William Hill also operates retail sportsbooks in Indiana, West Virginia, and Iowa, where it launched its mobile app in August 2019, and is a licensed sport betting provider in numerous casinos in Mississippi and New Mexico

Back in October, it announced a deal with Monumental Sports & Entertainment to operate and build a sportsbook inside the Capital One Arena, the home of the Washington Wizards (NBA), Capitals (NHL), and Mystics (WNBA) franchises. Subject to regulatory approval, it will be the first of its kind inside a professional sports stadium.

And in the last week, it has announced plans to launch betting on horse racing in Florida, having signed a deal with Casino Miami to open a Race Book, scheduled before the end of 2019. That’s a move that will give it a prime spot should sport betting be legalized in the Sunshine State.

Exciting times ahead for the William Hill brand in the US. Check back for more news and follow us on Twitter for the latest updates.