The moment we’ve all been waiting for is here! The Betfred Sportsbook at Grand Falls is NOW OPEN! The very first bet was placed on Kansas City (-1.5). Who do you think will win the BIG GAME? pic.twitter.com/PN0vpPsExc

Last week’s grand opening has been a long time coming as Betfred signed an agreement with Elite last July to run that company’s retail and online sports betting services at Grand Falls, having previously been approved as an out-of-state vendor by the Iowa Racing & Gaming Commission (IRGC).

The 3,500 square-foot Vegas-style Betfred Sportsbook, which had a soft launch on Monday of Super Bowl week, before a grand launch a few days later, is located in a renovated former stage area adjacent to the main gaming floor, boasting over 80 screens and reclining seats.

“When folks enter the doors, they are definitely going to see it is much brighter here at Grand Falls,“ said Sharon Haselhoff. Grand Falls General Manager.

“There will be some sportsbooks in Las Vegas that this would beat,“ she added.

The Larchwood venue is one of three resort-type casinos operated by Elite Casino Resorts and is situated in the northwest corner of the state, right on the border of Iowa and South Dakota.

It also lies just three miles south of the Minnesota border and that effectively gives Betfred access to sports bettors in two states where accepting sports wagers on sporting events is currently illegal. Due to tribal interests, that situation is unlikely to change anytime soon.

That said, the majority of the casino’s business is currently from Iowa residents located in the Sioux Falls metropolitan area, which is home to a population of around 250,000.

The British company was founded in 1967 by two brothers, Fred and Peter Done, who used their winnings from a bet placed on England to win the World Cup the previous year to finance the opening of a single betting shop in Salford, which is located in Greater Manchester, England. 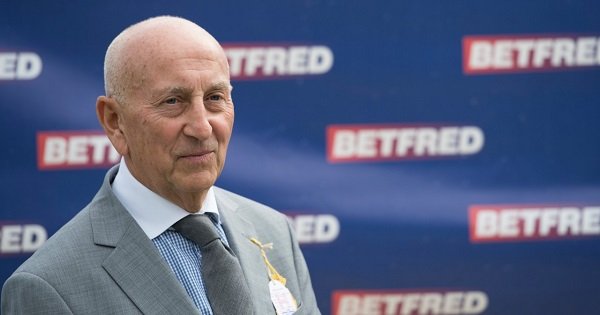 Fred Done founded Betfred back in 1967

Over 50 years on, Betfred has grown its portfolio of betting shops to over 1,600, becoming Britain’s third-largest high street chain, trailing only William Hill and Ladbrokes, while its share of the UK’s online/mobile market has grown at a steady pace since the launch of its digital platform in 2004. Betfred’s mobile app platform has been voted as one of the best for bettors in the UK and US punters would be keen to see a similar offering soon.

According to the most recent figures available, it handled £13.5 billion in bets through the year ending September 2018.

Iowa just the start for Betfred

Whilst it has primarily focused on the UK market, its ongoing expansion strategy has seen it launch in Spain last year, and having now crossed the pond with a retail sportsbook in northwest Iowa, it is hoping to move into four further states by the end of 2020.

Betfred already has access to the lucrative Pennsylvania market via the Wind Creek Bethlehem, a casino-hotel owned by the Poarch Band of Creek Indians.

The tribe also owns gaming establishments in Florida and Alabama and Betfred’s results in PA will likely determine whether they can ink additional deals for those two southern states in the hope they eventually legalize online sports betting.

Subject to regulatory approval, Betfred will operate a retail sportsbook at the Black Hawk casino venue, as well as providing an online version across Colorado, which voted last fall to allow statewide mobile betting.

“We’re going to be very aggressive when it comes to attacking different states and attracting partnerships. We want everyone to know who Betfred”, said Bryan Bennett, COO of Betfred USA.

Betfred’s online sports betting app, to accompany its retail sportsbook, is expected to go live in Iowa later this month and with the March Madness college basketball tournament behind the company’s first big push for new customers.

Under state law, customers have to first register at a physical sportsbook before being able to place wagers either online or via a dedicated betting app, with that requirement in place through the end of 2020.

This helps to explain why the growth of Iowa sports betting handle and revenue in the Hawkeye State has been slower compared to other states, such as New Jersey and Pennsylvania, and why the percentage of bets being placed digitally is currently around the 55% mark.

Hit us up on Twitter @Gamble_usa for more news on legal gambling in the US.