BetMGM Link Up with the LPGA Tour

BetMGM has signed a deal to become the official Sports Betting operator of LPGA Tour.

One of the major tours in the golfing world has finally taken the leap into the sports betting market. The LPGA Tour has announced it has inked a multi-year agreement with BetMGM, which sees the company become the first official sports betting operator and partner of the tour. As part of the agreement, BetMGM will include LPGA odds in its golf menu, alongside the PGA and European tours.

According to a press release, the sports betting company will also have the rights to use the official logo of the LPGA in its marketing for all sports betting products and services. Betting on golf events has grown in popularity recently in the United States, particularly for the major PGA Tour events. The PGA Tour and BetMGM sportsbook announced a multi-year deal for marketing and betting content in August 2020.

Brian Carroll, senior VP of global media distribution for the LPGA, described BetMGM as a “leading sports and entertainment company.” He said that as the company already supports women’s golf, it is “uniquely positioned to join the LPGA family as an Official Betting Operator.”

Carroll added that digital gaming and sports wagering are crucial elements of the future of sports, with BetMGM at leading the way for both opportunities. Carroll also was keen to stress how happy they were to sign the deal, saying they can now “provide more opportunities for our fans” to interact with the tour and learn more about the players.

This relationship makes perfect sense for the LPGA Tour and coincides with its partnership with MGM Resorts, which has existing sponsorship deals with numerous LPGA golfers. Some of these players include Danielle Kang, Cristie Kerr, Michelle Wie West, Natalie Gulbis, and Anna Nordqvist.

In October 2020, three of those players, Nordqvist, Kerr, and Gulbis, promoted BetMGM while playing the ShopRite LPGA Classic in New Jersey. The course which held the event is located 13.8 miles from Atlantic City.

MGM Resorts revealed this year that it has partnered with the LPGA for the Bank of Hope LPGA Match-Play tournament. The event will take place May 26-30 at the Shadow Creek Golf Course in Las Vegas. Additionally, this will be the LPGA Tour’s first match-play event in four years.

Matt Prevost, BetMGM chief revenue officer, said they are “looking forward” to working with the LPGA. He stated that the company’s “advanced betting technology” will provide a user-friendly experience for LPGA fans with lots of betting options to choose from.

MGM has been wrapping up a lot of sponsorship deals in the past few months, having signed deals with European soccer club Borussia Dortmund, TopGolf, and the Philadelphia 76ers.

Follow us over on Twitter @Gamble_usa for the latest legal casino and sports betting news across the US. 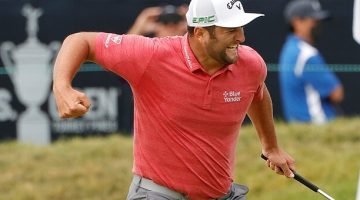 Jon Rahm is the U.S. Open Champion after capping off a great weekend with a…

The sports betting handle for New Jersey in May was up nearly 9% to $814M.…

In one of the most competitive playoff series in recent memory, the Milwaukee Bucks were…