DraftKings Casino is expanding its iGaming offering with the launch of DK Craps.

DraftKings Casino is expanding its online casino offerings with the launch of DK craps. Earlier this week, the betting operator revealed its mobile casino in New Jersey would be the first state to offer the prominent casino game. Additionally, DraftKings announced that Michigan, West Virginia, and Pennsylvania will follow pending regulatory approval.

According to a press release, the new DraftKings Craps game is a company exclusive and has been developed and created in-house. With the addition of DK Craps, there will now be more than 494 DraftKings Casino games available within approved states. Around 50 of those games have been built utilizing DraftKings’ in-house expertise and technology. The games will run alongside the live casino and DraftKings slots which have been hugely popular with players.

Jason March, DraftKings vice president of iGaming, described DK Craps as the “most realistic craps game on the market.”. March said that the company is excited to introduce a “premier online experience within our top-rated Casino product.” It wasn’t an easy process, however, with March adding that “Craps was a challenging game to develop” because of the “seemingly endless paths players can take.” Additionally, he was keen to praise the DraftKings internal teams, stating he “could not be prouder” after they developed an authentic experience. 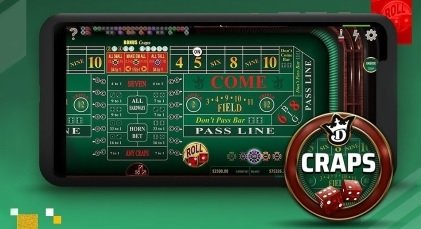 DK Craps will provide players with advanced betting features offering seamless in-app gameplay. In addition, the game will allow users to place multiple bets with one tap, to mirror the way they would make a singular request to a dealer in a physical casino. Additionally, players can swipe or roll the dice in the direction of their choice and retain the option to keep their bets on the table following each win.

DK Craps will also offer in-game tutorials and on-screen help to provide guidance for new players or those who haven’t played in a while. Players can download and play DK Craps via the DraftKings casino app on Android and iOS devices.

DraftKings Casino consistently remains near the top of the online casino revenue lists in all of the states where it is launching its new Craps game.

In the Garden State, DraftKings secured market access via a partnership with Resorts Atlantic City. In April, DraftKings recorded $18.9 million in revenue, which placed the company third on the list for total revenue generated in the state.

Since launching in Michigan on January 22, the day the online casinos and sports betting platforms went live in the state, DraftKings has held the third spot in the state’s monthly online casino revenue reports. In April, DraftKings posted $14 million in revenue in Michigan. The operator agreed to a deal with Bay Mills Casino to gain market access in the Wolverine State.

MaximBet has secured market access into the Pennsylvania sports betting market. The MaximBet sportsbook is…

The Houston Texans have not yet activated quarterback Deshaun Watson, and he won’t be active…