Parlay betting is one of the most popular bet types available, but customers are facing increasing problems that their sportsbook won’t allow them to place a parlay bet.

As legal sports betting continues to grow in the United States, there are many different types of bets and sports markets available to bettors. Players can choose to place a moneyline bet, point spread, over/under, or place a parlay bet. There are numerous ways you can gamble on a game involving your favorite team. With the online gambling industry now extremely competitive, sports betting apps must ensure they are offering enough betting options in addition to providing bonuses and promotions such as free bets.

One form of betting that emerged and became prominent among gamblers is parlays. It is now commonplace to find people wanting to place a team parlay on games or a parlay with numerous legs for a potential big win. One of the big attractions of a parlay is that there is the potential to win big from a small outlay.

However, parlay betting isn’t as straightforward as it sounds and a lot of customers are having problems with parlays. We are hearing a lot of customers seeing error messages such as “sorry unfortunately your picks cannot be parlayed”, which is causing a few of them to scratch their heads and wonder why.

Because a parlay wager has become so popular, inevitably, some issues have started to be reported with bettors trying to get their bets in. We have seen and hear examples of a site stating they won’t allow a parlay and players asking why can’t I parlay this? This article covers some of the common issues people experience with parlay wagering, and we list some of the issues with operators’ own parlay builders and unique parlay offerings.

What Is A Parlay?

We thought it would be wise to first delve into what a parlay bet looks like. Essentially, it is a single sports bet that involves two or more wagers combined into one. Rather than placing two bets, this single bet could include moneylines, futures, and point spreads. They are an attractive proposition because they offer the possibility of a higher payout over choosing a single team to win. However, this is countered by an increase in risk because every leg of the parlay needs to succeed. If only one loses, the entire parlay is unsuccessful.

Another appealing aspect of parlays to bettors is the flexibility provided. Bettors can choose to combine several sports into their parlay bet. For example, you could include the Cowboys from the NFL, the Bulls from the NBA, and the Ducks from the NHL into one single bet. If they all win, so do you, and the odds will reflect the likelihood of that happening, which means a potentially higher payout.

Most sportsbook operators offer parlay as a bet type, but not all books are equal and some are better than others. You may want to read our guide to finding the best parlay betting sites and apps.

Why You Can’t Parlay Certain Bets

You may come across an instance where you think bet online parlay not working. For example, if you use DraftKings, you might get a message stating, ‘sorry, the selected outcomes cannot be combined DraftKings.’ Well, there is one significant reason why DraftKings won’t let you parlay or any other sportsbook for that matter.

When certain outcomes are considered “correlated,” an operator will not accept a parlay bet. This means the sportsbook believes those bets cannot be parlayed together. Let’s look at a hypothetical example if you wanted to place a parlay on an NFL match:

Let’s say, in this instance, the Tennessee Titans are playing at home against the San Francisco 49ers. You believe that Derrick Henry will have over 4.5 catches, plus 70.5 rushing yards. You want to parlay those two bets, but the sportsbook won’t allow it. Instead, the site will only allow you to place two separate bets on Derrick Henry rushing yards, and Derrick Henry catches.

Rather than making this bet, you choose to wager the over on Henry catches (4.5) and also decide to bet on the Titans to win the game straight up. You again want to parlay these two bets. However, like in the first scenario, the sportsbook will not allow you to parlay these bets, requiring you to place two separate wagers. Instead, you decide to bet the over on Henry while also betting on the Seattle Seahawks to beat the Jacksonville Jaguars, and the sportsbook allows you o parlay these two wagers.

So why won’t the sportsbook let you include two bets on the same game in the same parlay? The answer is quite simple; they want to make as much money as possible. From the sportsbook’s perspective, the two Henry bets and the Henry Titans wagers are both linked. If Henry catches over four passes, there is more chance the Titans will win the game because Henry is one of the best players in the NFL.

So, in the eyes of the sportsbook, they need only to allow bets in a parlay that are utterly unrelated to each other. By doing this, the operators massively increase their chances of winning the parlay. Attempting to predict the results of five entirely separate outcomes is much more challenging than guessing the results of outcomes that are linked in some way.

Same game parlays on the FanDuel app are one of the operator’s best betting features but they have been causing a lot of confusion among customers. A lot of players are seeing same game parlays locked or unavailable and thinking this is an error on part of the book. Which in some cases it is. Other times it is just that the bet is unavailable as certain outcomes are considered correlated, and therefore unavailable as selections and can’t be parlayed together.

The FanDuel same game parlays are actually very good and generally, we don’t have any issues with them. If the option is locked out, try and sign out then back in and see if that works. Just remember that the majority of books heavily restrict parlay bets. Why do they do this? Well as we explained above, they don’t want to give players any more of an edge than they have to.

There is a lot of math and odds at work during a parlay, particularly during a same game parlay and they won’t all be available. They aren’t necessarily true odds when you bet a same game parlay, the correlated bets get taken into account and it can and does affects the available odds and outcome.

The BetMGM sports app has become one of the most popular sportsbook apps on the market. They offer one of the best choices of betting markets, an awesome easy-to-use design, good odds, and a lot of unique features, like the BetMGM same game parlay builder. But a lot of players are finding they are having issues with the one game parlay not working properly. 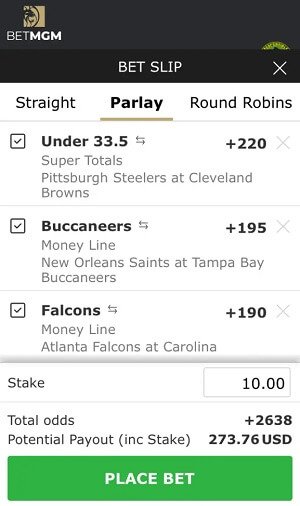 Similar to the issues with FanDuel, offering same game parlays is no straightforward task. There are a lot of variables and correlations that happen across parlays and they won’t always be available. Sometimes this can be a technical issue and if it is, it’s usually resolved very quickly. Other times this can be because the bets are too closely correlated and therefore not available to be parlayed.