Week 3 of the NFL season is nearly upon us, and we are going to cover all of the matchups to determine the best bets. Sunday Night Football’s contest has the Los Angeles Rams traveling to the Midwest to take on the Cleveland Browns.

Both teams are coming of big wins against their Week 2 opponents, and they are looking at making a run at the playoffs. There are a number of moving pieces in this matchup, but we are here to help break it down and pick the winner of the game.

Last year ended with the Rams getting so close to the top but falling just short in the end. Being the runner-up is never a great feeling, but the Rams have rallied in 2019.

Week 1 brought a tough road contest against the Carolina Panthers. The Rams had trouble containing Christian McCaffrey but had major success limiting Cam Newton and the passing attack.

Even with McCaffrey’s monster game, the Rams held on to win 30-27. Last week had the Rams matched up against the New Orleans Saints in a rematch of last year’s NFC Championship Game.

Everyone was prepared for a shootout between the two high-powered offenses, but early in the game, Drew Brees hit his throwing hand on the helmet of a defender. Brees exited the game, and the Rams took over from there. They shut down back quarterback Teddy Bridgewater and convincingly won the game 27-9.

The Rams’ passing attack has looked sound in both games so far. Robert Woods, Cooper Kupp and Brandin Cooks have all had their fair share of targets and catches. 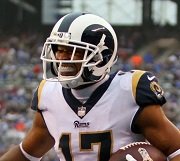 That trio of receivers is hard to stop for any defense. Couple it with a strong rushing attack in Todd Gurley and Malcolm Brown, and the Rams very well may be on their way to another Super Bowl.

Talking about the Rams without mentioning Aaron Donald would be a disservice to his greatness. Donald, while not having any sacks in 2019, has been wreaking havoc all over the field. The Rams are poised to make a run in the NFC and winning on the road in Cleveland will solidify their contender status.

A Tale Of Two Games

Week 1 had them falling apart at the seams against the Tennessee Titans. Baker Mayfield threw three second-half interceptions, and the defense could not come up with a stop.

Week 2 was a road matchup against the injury-plagued New York Jets. The Jets had trouble coming up with any scoring drives in the game, and Odell Beckham Jr. showed us why he still might be the best receiver in the league.

Beckham finished the game with 161 yards receiving and a career-long touchdown reception, leading the Browns to a 23-3 victory.

The Browns had a lot of hype behind them coming into the 2019 campaign. Week 1 presented some difficulties in the offense and holes in the defense, while Week 2 saw improvements on both sides of the ball.

They are poised to return to being the team that we thought they were, although this Week 3 matchup against the Rams is no easy plight.

This game opened with the Browns being a home dog at +2.5. The over/under is set at 50.5.
Vegas is not buying into the Browns as an elite team just yet. The Jets victory was nice, but ultimately they were playing against a third-string quarterback.

The Rams are locked in after their Super Bowl loss last year and will keep rolling in Week 3. Take the Rams at -2.5 to win on the road in Cleveland and take the over. Make sure to lock in your bets before Sunday night!