Legal sports betting in New York is up and running at seven locations and revenue is set for a boost from NFL’s kickoff.

New York became the 10th state to offer legal sports gambling back in July, taking advantage of the Supreme Court’s 2018 decision to strike down a federal law that banned wagers outside of Nevada, although mobile and online wagering is excluded.

The first sports bets were placed at two commercial casinos: Rush Street’s Rivers Casino in Schenectady, which launched on July 16, and the FanDuel-partnered Tioga Downs Casino, which followed suit a day later.

They were joined in early August by two tribal-owned casinos. The Oneida Indian Nation, in partnership with Caesars Entertainment, launched sports wagering at Turning Stone Casino in Verona and at Point Place Casino in Bridgeport.

Sports wagering at the nation’s third casino, Yellow Brick Road, in Chittenango, opened just in time for the new NFL season. At nearly 9,000 square feet and combining a sports bar with a betting lounge featuring a 32-foot LED screen and more than 35 big-screen TVs, it is New York state’s largest sportsbook.

The opening of the bet365-powered Resorts World Catskills last Thursday brings the number of sportsbooks operating in Upstate New York to seven.

After a steady start, sports betting revenue in New York more than doubled month-on-month, with the August revenue figure reported at $783,896.

Rivers Casino, which houses the closest sportsbook to the neighboring states of Massachusetts, Connecticut and Vermont, was the top-grossing casino for August, with revenue up 51.3% from July to $445,291 – compared to a combined $338,605 from the other three sportsbooks in operation. 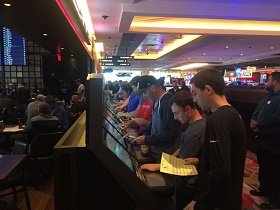 Tioga Downs Casino produced a higher month-on-month improvement of 59.0%, albeit its $87,774 total is from a lower base.

And those figures are set to take a big jump again this month, judging by the crowds for the opening weekend of NFL football.

At Rivers, where lines of sports gamblers stretched more than 50 deep before NFL kickoff Sunday, business is certainly living up to the casino’s expectations.

The casino is also trying to capitalize on those gamblers who hang around to watch the games, by opening blackjack pits that would otherwise be closed on Sunday afternoons.

However, with sports betting revenue taxed at just 10% – far lower than that of slot machines, which can be as high as 45% – Rivers is looking to expand its sportsbook and, if regulations change, add more kiosks throughout the casino.

Is online betting coming to NY?

Not until the state passes a law to expand how sports betting can take place.

State Sen. Joseph Addabbo introduced such a bill in the State Senate in June. But it stalled in the Assembly, which now won’t vote on the matter again until the new legislative year in January, at the earliest.

Indeed, Gov. Andrew Cuomo has said that legal online sports wagering may require an amendment to the state’s constitution, which could take years.

Although proponents have suggested a workaround – that the servers to process any mobile transactions are physically located inside the state’s four licensed casinos.

A study ordered by the New York State Gaming Commission to look into the “entire gaming industry in the state”, due to begin on September 1, has been delayed and now looks likely to run into the first quarter of 2020.

So for the foreseeable future, New York bettors must place their bets in person. And without online sports betting, New York will not realize the full potential of its industry.