Sports betting in West Virginia is thriving and that’s largely down to the return of online and mobile betting in the Mountaineer State.

Following a relaunch in August, September marked the first full month of online sports betting since BetLucky.com shut down as a result of a legal dispute earlier this year, and the latest figures suggest the market is well on the road to recovery.

According to numbers released by the West Virginia Lottery Commission, sportsbooks (retail and online) in the state combined for $25.6 million in sports wagers and generated $3.8 million in revenue last month.

Breaking down those figures further

Currently there are three land-based sportsbooks serving the state along with two online and mobile sportsbooks:

Whilst William Hill have yet to launch their digital sports betting offering, their retail sportsbook at Mountaineer Casino is doing brisk business, with bettors wagering $4.3 million on sporting events in September, generating $576,000 in revenue.

But that handle figure falls well short of the $17.9 million in wagers being produced by the DraftKings-branded sportsbook at the Hollywood Casino at Charles Town Races, which held onto $2.6 in revenue. 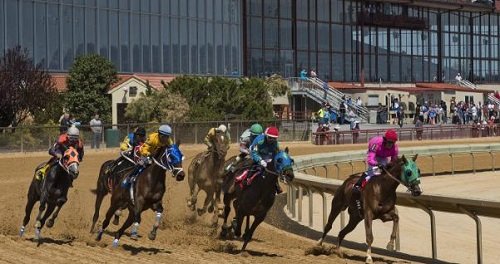 The FanDuel sportsbook at the private Greenbrier Resort also had a good month, with $4.3 million in sports wagers and revenue of $531,000.

With the football season now in full swing and two quality betting apps now live in West Virginia, it’s a safe bet those figures will keep on growing.

And bettors in West Virginia may soon have a third mobile sports betting option in PointsBet.

The Australian company is currently live in New Jersey and is hoping to launch in the Mountaineer State before the end of the current football season, although no definite timeline exists.

“Our goal is to get going in West Virginia as soon as possible, which could include this football season, although there are so many outside factors in play that it is hard to commit to a timeline.” said PointsBet USA director of communications Patrick Eichner.

The expansion into WV comes as part of a recent deal with Penn National Gaming, which owns the Hollywood Casino. Under state law, the casino can partner with up to three operators or skins, as they are known in the industry.

In the meantime bettors will just have to be content with DraftKings and FanDuel, and these pair are clearly making the most of their head start.

Together they have revitalized the WV online market and for the week ending September 28th they made more money than ever in their five-week existence.

The only blip was in the handle figure for the same week, which didn’t grow for the first time in over a month. But that was almost certainly as a result of a bye week for the West Virginia Mountaineers.

It’s unclear exactly what percentage of bets in the state are placed on WVU football, but it’s fair to say a good portion.

Bookies expecting a bloodbath this week

The Mountaineers are now 3-2 after losing (31-42) to the Texas Longhorns last weekend and bookmakers aren’t expecting them to improve on that record when they visit Oklahoma on Saturday.

DraftKings are favoring the Sooners by a massive 33 points, which is the second-biggest point spread that West Virginia has ever faced as an underdog – the largest came in 2001 when they faced No.1 Miami as 35-point underdogs.

Whether bettors take the leap of faith required or not, there is still a very tasty deposit bonus worth up up to $500, as well as a risk-free bet up to $200, for all new customers who download the DraftKings WV app.

Playing Blackjack at AOL is one of the most popular pastimes. The online game has…

Major League Baseball is offcially Back

After a three-month-long battle, Major League Baseball officially announced a return date and plan on…

Rush Street gets Michigan access via the Little River Casino