If you’ve ever watched the TV show Deal or No Deal, you’ll immediately recognize the Deal or No Deal slot from GAMING1. The slot recreates the setting of a famous old show, with the entire game display designed to evoke nostalgia, which should be instantly noticeable. 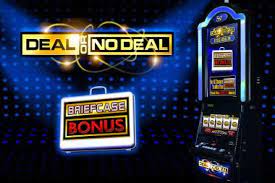 This famous British TV game show has been adapted into a 5-reel, 10-payline slot game. This 2016 release has a decent RTP of 96.40%, clear graphics and excellent bonuses. The game show also has different casino varieties, but the aim is the same: win as much money as possible on the reels and with the various bonus features. These features are closely inspired by the original game, in which you go through several suitcases to uncover their treasures.

You can play this iconic TV show-inspired slot online for as little as $0.10 per spin on any modern device, including mobile, tablet, and desktop. If you’ve always wanted to be on this show but never got the chance, now’s your time. Read our whole Deal or No Deal slot review below to find out all you need to know about it.

You can join one of the above casinos to play Deal or No Deal slot for real money or free in the US. Licensed by the authorities in each state they operate in, they are the safest and more reliable operators to join. You can play the online slot or use the apps to enjoy the game on the move. Click on the links to get started.

Most players should be able to immediately recognize that the Deal or No Deal slot machine is based on the successful tv show of the same title. The slot game’s background is glitz and glam, much like the TV program. It is decorated in dazzling gold shades, with multicolored neon lights sprinkled around. The reels are transparent by design and take up most of the screen area. It also includes all of the TV theme tunes and sound effects, giving the game a terrific feel as you go through the bonus game. 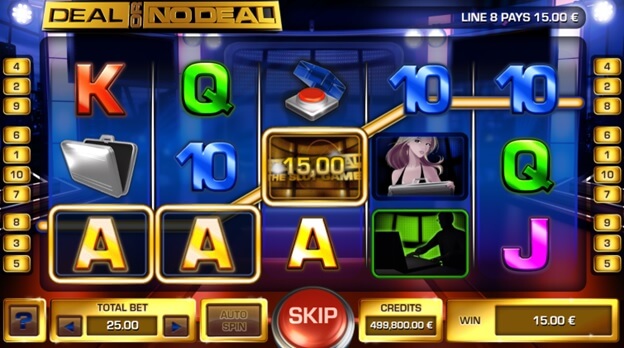 This theme has been brought up in many ways in Deal or No Deal slots. The symbols are also based on the Deal or No Deal game theme. Classic symbols in the game include standard cards like the number 10, Jack, Queen, King, and Ace. A suitcase, red button, hostess, and presenter symbol are among the more rewarding and distinctive symbols. The game also includes suitcases with secret cash prizes inside. During the bonus rounds, you’ll see even more of the suitcase game’s action.

How to Play Deal or No Deal slots

This online slot is based on the TV show Deal or No Deal, which has become a massive hit due to its simple, but very addicting gaming concept. The game is set out pretty simply, with five reels and ten standard paylines on which you hope to make winning combos.

Deal or No Deal Paytable & Symbols 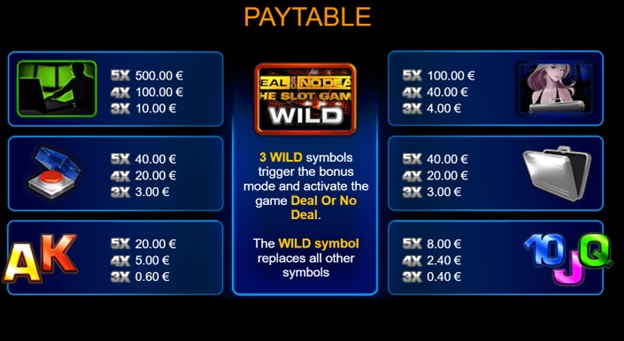 The paytable for the Deal or No Deal slot machine is rather basic and mostly made up of the show’s original symbols with a few additional ones. Standard playing cards like the 10, Jack, Queen, and King pay the least, while presenters, suitcase girls, and silver suitcases pay the most.

Deal or No Deal Bonus Features

The Deal or No Deal slot’s bonus games have a lot more in common with the TV game show than the game’s other aspects. Fans of this popular show will undoubtedly like this slot game’s three different bonuses. 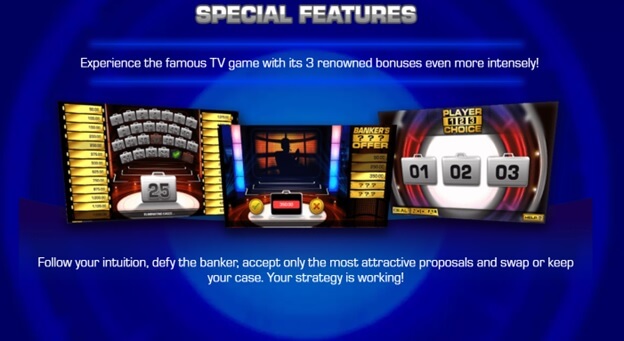 You may get this bonus at any moment while playing the game where you see three big silver suitcases with the numbers 1 through 3. You can pick any of these three suitcases, and you’ll receive the prize for that suitcase. Additionally, after choosing one, you will see the real cash prizes in the other two suitcases, which you will not receive. 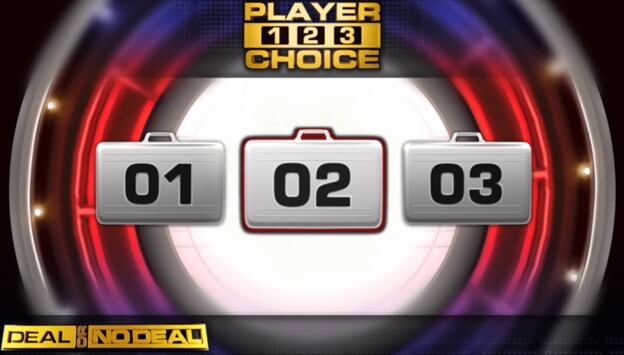 The Bank’s Offer is a unique bonus game that appears at random times. You will see an open suitcase with an offer, which you can accept or refuse. You can reject the first suitcase you open and make a new selection if you’re not satisfied with what’s inside.

A maximum of five suitcases can pass through at once; if you decline four times, you will automatically win the fifth suitcase’s prize. The offers you receive in this bonus round vary from a minimum of 2x your stake to a maximum of 20x. 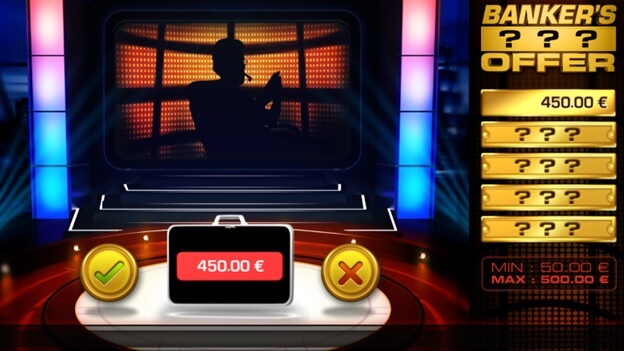 Deal or No Deal Bonus

The “Deal or No Deal” bonus is the game’s main attraction, and to activate it, you must gather three wild symbols on the same spin. Following that, you will play a version of the well-known suitcase game where you have a choice of 26 suitcases. After that, the use of suitcases will end, and you’ll start getting cash offers. It is entirely up to you whether you decide to accept the banker’s offer or keep playing.

You will have two options if you complete the game to the very end, and you may still swap suitcases at the conclusion. In this TV game show’s original bonus round, you may win up to 5,000 times your wager. After the Deal or No Deal bonus, there is a strong possibility that you can still play one of the other two additional games. 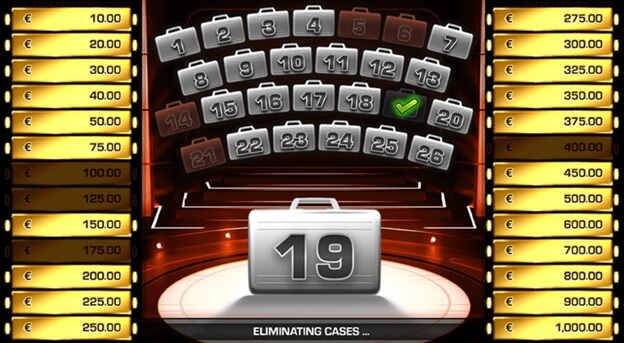 Deal or No Deal Mobile Slot

Deal or No Deal slot machine is playable on various devices, including a fantastic Deal or No Deal mobile optimized slots version. You can now enjoy the thrill of the game entirely independently on your tablet or mobile device. This game is compatible with all iOS, Android, and iPhone devices. When playing on mobile devices, you may also choose between Landscape and Portrait orientations.

Gaming1 created this slot utilizing HTML5 technology, so you can play through desktop and mobile without downloading any special software. Deal or No Deal fans can play the game online at our recommended online casinos or their gambling apps. We conducted extensive and committed research to identify the most acceptable Deal or No Deal casinos where players can enjoy error-free gameplay. Just register an account, make your initial deposit, and don’t forget to take advantage of the welcome bonus, which can significantly increase your bankroll.

Deal or No Deal RTP & Volatility

RTP (Return to Player) is, as you may know, a fantastic method to predict how much a game will pay out. The payout percentage or RTP in the Deal or No Deal slot game is decent at 96.40%. This percentage is higher than the industry norm and better than many newer slot games. It was significantly higher than the average payout rate in 2016 when the game was released.

While the RTP is useful, the game’s volatility also matters when determining how well you’ll earn while playing. The Deal or No Deal slot machine volatility is at a medium level. It implies that when playing this slot game online, you may receive average-sized prizes pretty frequently.

For fans of the famous TV show “Deal or No Deal,” Gaming1 has created a fun and engaging slot. It is an old player favorite that was formerly quite popular on television screens. Like the TV show, these slot games attracted players with their riches and fascinating and eye-catching gameplay. The wagering amount has been maintained modestly to attract all types of players, but the attractive bonuses will undoubtedly capture big-stakes gamers.

Due to the popularity of the iconic TV program, Deal or No Deal slots are available at almost every casino in Las Vegas. This excellent themed slot with realistic sounds will surely transport you to the set of the iconic TV show “Deal or No Deal.” The variety of mini-games with different suitcases carrying cash rewards is hugely appealing. Also, keep in mind to focus on the logo symbols to get your moment of glory as quickly as possible. So if you love the TV program Deal or No Deal, try your hand at this well-known TV game now without leaving your house.

Deal or No Deal FAQs

What is Deal or No Deal slot RTP?

RTP is an important aspect to consider while selecting a slot machine to play for real money. The RTP in this slot game is higher than the industry average, at 96.40 per cent. It means the slot machine may pay the equivalent of $96.40 for every $100 wagered in the long run.

Can I play Deal or No Deal on mobile devices?

Like many others from this provider, the Deal or No Deal slot game is built with HTML5 technology. As a result, all mobile systems, including Android, iOS, and iPhone, are supported, and the visuals are well-drawn, with great symbols and an HD feel. The recommended casinos also provide iOS and Android casino apps that you can download after signing up for an account using our links.

What is the volatility of Deal or No Deal?

The game has medium volatility, which means it may pay out medium-sized winnings regularly while also providing times of winning streaks with the risk of having dry spells. If you want balanced gameplay and slot payouts, medium volatility slots are always the ideal option.

How to win at the Deal or No Deal slots?

Similar to the majority of other online slots, three matching symbols must appear left to right on adjacent reels to win at the Deal or No Deal slot machine. If the bonus game is activated, you can choose the boxes to uncover the real cash rewards hidden within. The game continues until you accept or reject the banker’s offer and expose the sums in all the other boxes.

Are there similar slot games to Deal or No Deal?

You can play games similar to this one, such as Deal Or No Deal: The Banker’s Riches by Endemol, which has five reels and 20 paylines. The Banker’s Riches version offers several opportunities to win, including a click-and-pick bonus game and a free spins feature. The Deal or No Deal World Slot also comes in a variant with a slightly different design and symbols but the same three bonuses and three progressive jackpots. The traditional boxes are replaced with silver and gold covers in this edition. Deal or No Deal Slingo is another excellent game to play online in the USA, combining bingo and slots under the popular theme.

Who is the software provider of Deal or No Deal?

Gaming1, the developer and software provider behind it, is well-known for its extensive collection of pop culture and real television-based free slots, which do not disappoint. They began in 2011 and have steadily offered a variety of player favorites while also providing gamers with a very inclusive online gaming environment.

Where can I find the Deal or No Deal slot machine?

Online gambling is currently legal in five states, namely, NJ, PA, WV, CT, and MI. The apps listed on this page accept new players from all legal states, so you can play Deal or No Deal legally there. A welcome bonus or free spins will be handed out after you sign up.