Money Train 3 brings the return of the gang of dystopian gunslingers as Relax Gaming continues its hugely successful slots series. It is the latest entry in the hugely popular genre, bringing you on another wild ride over five reels with Wild substitutes, Respins, Bonus Buy, and the Money Cart Bonus Game with extra special characters. This highly volatile release has a fixed RTP of 96.10% and enough changes and consistency to delight the series lovers.

Relax Gaming significantly improved the Money Train 3 slot over the previous two versions in the series. While the theme is changed, the developer kept the 5×4 grid from early versions and the 40 paylines. In the base game, you can potentially get a sticky symbol streak respins feature at random times, but the main attraction is the Money Cart Bonus Round. This time, it comes with 13 unique modifier symbols, and the winnings might be incredible, with a maximum win possibility of 100,000x the stake.

So far, it appears to be bigger and stronger, but can it capture the hearts of Money Train fans? Let’s learn everything there is to know about it by reading our in-depth review below.

If you are interested in a behind-the-scenes and how the development of this slot occurred then the video goes in-depth into the design process of Money Train 3 and how the game has evolved through its various releases; for anyone interested in the math behind slots, this is an interesting watch.

Money Train 3 comes packed with bells and whistles. US gamblers are lucky to have access to Relax Gaming titles, since it is one of the best iGaming providers. While not yet available in all states where gambling is legal, the game can be played within the listed casinos in NJ, PA, MI, CT, and WV. Don’t forget to click our links to get a free sign up bonus for Money Train 3.

After using steam-punk and Wild West themes in the Money Train series, Relax Gaming introduces a unique theme for its third edition. The game’s design has a futuristic theme, where the creators switched from the initial steam-punk idea. You can expect exciting gameplay that creatively combines sci-fi stories with 3D features from the future. It is clear even from the introduction clip, which transports you from a desert landscape to a high-tech locomotive engineering scenario. The game’s action and atmosphere are great, as one would expect, and all of the characters are well-created. 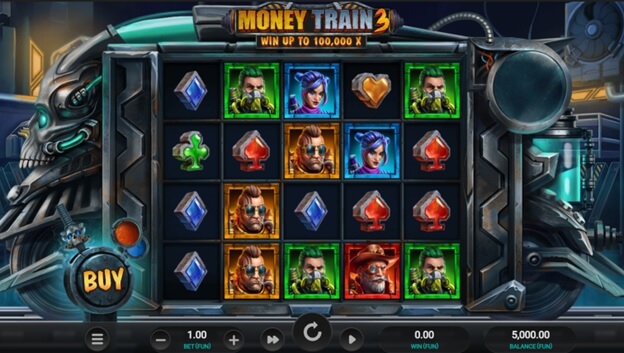 The futuristic train station, which appears to be fueled by a turquoise liquid and has a giant dead skull put at its front, can be seen in the background of the reels. The graphics in Money Train 3 are stylish, significantly improved over the original, and have a gloomy atmosphere. The music is an intense and repetitive beat with frequent bleeps and modern sounds, giving the game a pacey, dynamic feeling. Overall, the futuristic theme feels like a natural evolution from the previous two themes, but it will also leave you wondering where Relax Gaming slots will go next.

In the futuristic Money Train 3 online slot world, you will be tasked with robbing a train with a 5×4 format and 40 paylines. In terms of atmosphere, this online slot provides a high-tech train-themed encounter, with a futuristic-looking skull train lining the reels and some laboratory looming in the backdrop.

You can encounter intriguing symbols in the Money Train 3 slot game, loaded with gold bars and multipliers. The four playing card suits and four symbols representing characters from a fantasy world go with you on the money train adventure. The game’s higher payouts are represented by four-character symbols, while the lower paying symbols are diamonds, clubs, hearts, and spades offering 3x to 5x the stake for five of a kind.

For a full pay line of five of a kind, the attractive woman pays out 8x your bet, followed by the Green Masked man at 10x your stake. Then there is Orange Man, which pays out 10x your stake, while Red Older Guy and Wild are the highest paying symbols, delivering 20x for five of a kind. The game also features a bonus symbol that initiates a new round where you can select a unique hero.

It is where things get up, and there’s much to discuss regarding Money Train 3 bonus features. So, let’s see what this exciting third edition of the Money Train series has in store for you.

You can activate a re-spin feature in the base game, which will randomly trigger after any spin that doesn’t result in a win. When activated, one of the symbols becomes sticky, and the remaining reels spin again. Every time one or more new symbols land on the reels, they will also become sticky, and a new respin is rewarded. 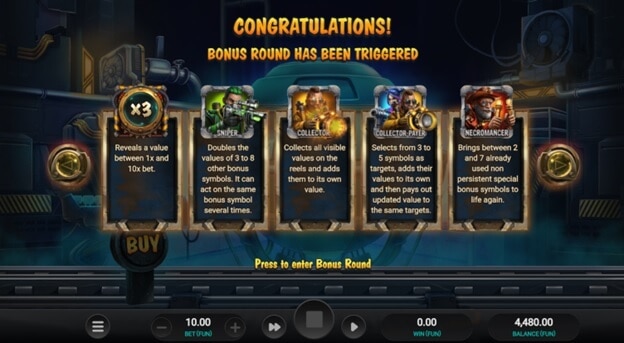 The Money Cart Bonus round has gained popularity in the world of online slots since the launch of the original Money Train game. To activate it, a minimum of three bonus symbols must appear in the base game. When triggering the Money Cart bonus round, you can also land Persistent gold symbols, which can substitute the bonus symbols and make it one of the best slot bonus features available online.

The triggering symbol becomes sticky, revealing a value shown as a bet multiplier and awarding three re-spins. If a Persistent symbol activates the bonus round, its action will reveal before the initial spin. If you successfully fill an entire reel with symbols, a new reel on the side is opened, from which you can open a maximum of two other reels. In addition to the standard symbols with multipliers of 1x to 10x, the Money Cart bonus round includes 13 different special modifier symbols, including persistent symbols: 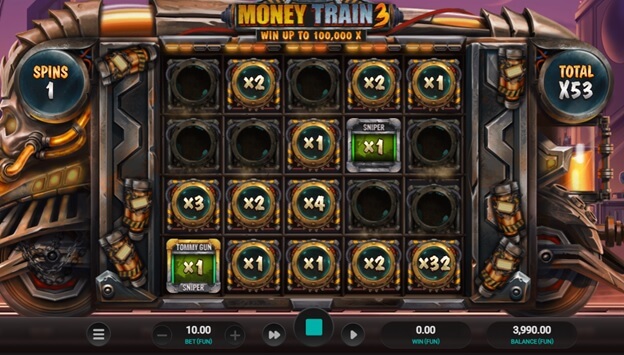 If you prefer to enjoy the bonus game right away, you can use the bonus buy feature, which increases the RTP to 96.50%. You can select one of four bonus options, beginning with a free spin offer worth 20x your stake. Other bonus Buy choices include two free spins at 50x, the regular bonus round at 100x, and the Persistent feature at 500x. 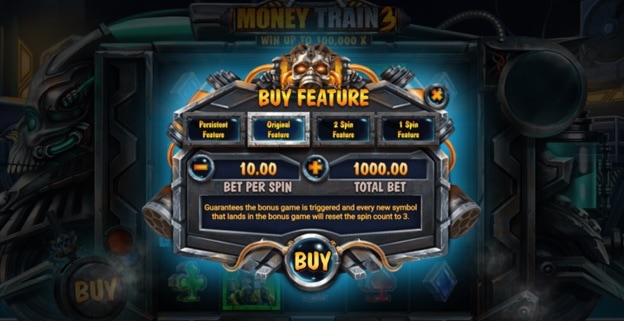 Slot machines have emerged as the classic casino games that adapt themselves the most to the mobile platform. Therefore, Relax Gaming also provided a mobile version of the Money Train 3 slot, enabling you to travel through time using any cutting-edge device. Thankfully, the slot machine was created using HTML5 technology, allowing it to work with tablets and smartphones running Android, iOS, or Windows. It implies that you can easily enjoy it whenever you want, wherever you are.

You can play the Money Train 3 slot game instantly through mobile browsers without having to download anything to your smartphone or tablet. You can sign up to one of our recommended online casinos and play the game on your mobile device for real money wherever you like. These sites also offer new players lucrative casino bonuses, allowing them to play Relax Gaming slots safely at the best online casinos.

The RTP of the Money Train 3 slot is higher than the average, which is 96.10%. Remember that it increases to 96.50% when you buy any of the four bonus choices. This third version seems the perfect sequel, made even better by an above-average RTP of 96.10%. The RTP is a crucial feature to consider when selecting the perfect online slot for you. It describes the theoretical payout percentage that the player will get in the long term.

The RTP is pretty good, but it is necessary to note that the game is very volatile, and the balance might alter dramatically throughout the spins. Volatility affects how risky an online slot game is to play because it shows how frequently you are likely to hit wins and how much you will receive. As a result, the high volatility of this slot may result in highly valued but less frequent awards.

Money Train 3 slot appears to be one of the must-play titles, thanks to its outstanding slot payouts and entertaining special features. The design is identical to earlier versions but with a beautiful polish and modern touch that gives the game a robust vibe. The train has undergone fine-tuning, and its visual and content features quickly capture visitors.

While the base game is enjoyable, the true adventure comes in the bonus game. You can activate respins or a Money Cart round with special symbols, where the max win possibility can reach 100,000x the stake. The Wild symbol is also there; in addition to being able to take the place of the standard symbols, it also offers significant rewards up to 20x. It’s a very action-packed and magnificent train trip where fantastic experiences await daring travelers. So, it’s time for you to join this fast-moving train and try to rob the online casino for enormous rewards.

What is the Money Train 3 RTP?

Money Train 3 is a futuristic heist slot machine with a 96.10% RTP that increases to 96.50% if the bonus buy is used. This incredible slot is among those with an above-average Return to Players because of its RTP of 96.10%.

Can I play Money Train 3 on mobile devices?

Yes, the Money Train 3 video slot is compatible with all devices and is suited for mobile gaming. This slot machine runs smoothly on all devices, including mobile, desktop, and notepads. You can also play on the portable version for real money and in demo mode.

What is the volatility of Money Train 3?

It is a high-volatility release from Relax Gaming, so be prepared for a rough ride. It boasts a volatility level of 5 out of 5, which is considered high by any measure. As a result, wins may be rare, and you may need the patience to get big wins.

How to win at Money Train 3 slot?

The player wins when three or more identical symbols land adjacently from left to right across the 40 fixed paylines. Additionally, you can activate the renowned Money Cart Bonus if you want to increase your payout.

Are there slot games similar to Money Train 3?

If you want to play games like this, where various characters can enter the action to boost your winning chances, you can play Money Cart 2. Prizes of up to 5,000x your bet are available here, and the Re-Spin feature is central to the action. Push Gaming’s Mad Cars slot is another solid option; it features a 5×6 grid with 50 paylines, a car race in the bonus round, and persistent modifiers that can result in significant rewards.

Who is the developer behind the Money Train 3 slot?

Relax Gaming is the creator behind this magnificent release, which enables you to experience an emotionally packed train trip once again. They have created some great new special symbols within this slot and tuned this masterpiece with great care and expertise.

Where can I play Money Train 3 slot?

You must register for an account, preferably at one of our recommended online casino sites, to play Money Train 3 for real money. Check out the top Money Train 3 casinos above and select the best real money promotion for you. In addition, when you register as a new player, you can get free spins or up to $100 free play bonus.