The 100th season of the National Football League treated us to a historic rivalry last Thursday night between the Chicago Bears and the Green Bay Packers.

This week has us in another division rivalry where the Tampa Bay Buccaneers will head to North Carolina to take on the Panthers.

Both of these teams started their seasons 0-1 after losing their Week 1 matchups. One team certainly looked much more promising than the other, but losses count the same for everybody.
In this article, we will take a look at the matchup between the two teams and help assist with betting picks in order to make the best selection before Thursday.

Winston Has His Job On The Line

It is no secret the Jameis Winston has been surrounded in controversy his whole college and NFL career. With outbursts, suspensions and even allegations of sexual assault, Winston has been a polarizing player for all the wrong reasons. Week 1 against the 49ers did not do the Tampa Bay quarterback any favors. Winston actually managed to throw two pick-sixes against the Niners defense. 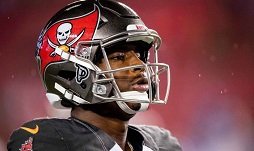 Winston finished the contest a mediocre 20 of 36 for 194 yards, one touchdown and three interceptions. None of the skill-position players for the Bucs stood out at any point in the game. Star wideout Mike Evans seemed to disappear at times on the field.

The Buccaneers ultimately lost this game 31-17 at home, with very few positives to take away from it. They will have a lot of question marks heading into this game against the Panthers.

The Carolina Panthers had a tough Week 1 matchup against the defending NFC champs. The Los Angeles Rams made it all the way to the Super Bowl last year and did not lose many key players from their run. The Rams had a balanced attack against the Panthers and almost gave away the game at the end with a missed field goal from Greg Zuerlein. They held on and beat the Panthers 30-27.

For Carolina, the big concern coming into 2019 was Cam Newton. Newton is coming off of shoulder surgery and looked a little shaky in the opener. We do not want to read too much into a Week 1 game, but Newton might have to work to find himself as the season goes on.

The biggest takeaway from this game was just how good Christian McCaffrey looked on offense. The third-year running back was shifty, elusive, and fast against the Rams defense.
McCaffrey finished the game with 128 yards rushing and two touchdowns on 19 carries. He also hauled in 10 catches for 81 yards and was the Panthers’ leading receiver.

The Panthers have to be thanking everything that they have someone as dynamic as McCaffrey in the backfield every week. He should be able to cover up Newton’s slow start and help vault the Panthers into the playoff picture.

The opening spread has Carolina favored at home by 6.5 points, with their moneyline set at -300. The over/under comes in at 49.5.
Look, it is no secret how bad the Buccaneers looked against the 49ers in Week 1. Winston has had bad games in the past, but that was an abomination.

Still, it is only Week 1, so to predict blowouts would be unfair to any team. With that being said, I like Carolina at home in this matchup.

I think McCaffrey will come out and have close to a repeat of, or maybe even surpass, his Week 1 totals, and Newton should be good with a little bit more of his legs underneath him.

Lock in the Panthers at -6.5. Take the over for all the offense in this game. Until next time!