SugarHouse Casino is one of the most popular online casino destinations in PA & NJ. The online operator has some of the best slots to play, but with so much choice, which are the best games to play?

Players are signing up for online casinos in considerable numbers to enjoy casino games such as roulette, blackjack, and online slots. Slot games, in particular, have proven to be a huge hit with online casino players due to their variety, jackpot giveaways, and also because they are great fun.

In this article, we are going to look at the top 5 slot games on SugarHouse Casino. Rush Street Interactive operates the casino, and the SugarHouse sportsbook is integrated on the casino platform. There are typically many slots available at online casinos such as Rivers Casino and Hallmark Casino.

What slots payout the best on SugarHouse? If you want to play slots with SugarHouse casino online, the best 5 slots to play are

One of the primary reasons slots are so popular at online casino sites is that they give you the best bang for your buck. Whether you are playing to try and win some serious money or just for pure entertainment, high tempo online slot games always deliver. With SugarHouse Casino having over 350 slots to choose from, with different jackpots and prizes, selecting the best ones can be difficult.

There may be some operators you prefer, games that work better on a mobile device, or some slots that you can claim on a bonus on. All of these factors and more will play a part in deciding which slots you choose to play. We have selected five slots that we believe have the best features, reels, and offers available at SugarHouse Casino. You can read our full review of the online casino here SugarHouse Casino review.

New players joining at playsugarhouse.com can claim a 100% matched deposit bonus up to $250! Use the promo code 250MATCH and SugarHouse will match your first deposit up to $250. Ther is a 1 X playthrough wager requirement making it one of the best offers you will find anywhere.

The name Starburst will be familiar to anyone who has enjoyed online slots in recent years. It is one of the provider NetEnt’s top slots and has been one of the favorites of online slot enthusiasts since it was introduced to the gaming market in 2012. Starburst shines because of its simplicity. There are only five reels and ten paylines. Furthermore, 10 cents can bag you prizes worth as much as 500,000 coins.

Many slots bombard players with features such as video clips, messages, and promos; however, Starburst retains a simple feel which is attractive to players. The spin rate stands up against any other online slot game, which means players can maximize the value of their online playing time. 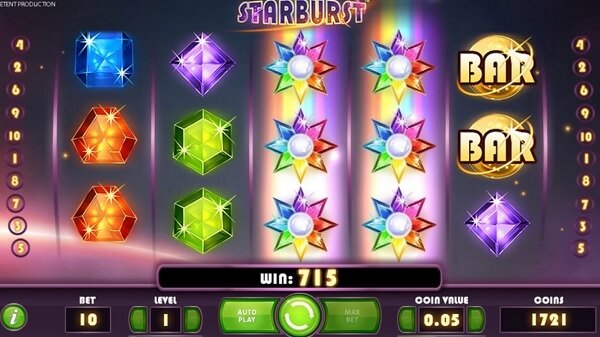 Even though this is a simple slot, it does have some nice extras to enjoy. The Starburst wild star, which is so prominent as it illuminates the screen, is essential to look out for. Whenever it lands on the reels, it offers players the opportunity to maximize the combinations. Furthermore, when the Starburst wild activates, players receive a single free spin for the value of their last bet. So, you get a nice little bonus as well.

With the Starburst wild feature and the ease with which you can roll through countless spins, it is no wonder Starburst is one of the most popular online slot games out available. Even with no free spins feature, it retains a return player rate of 96.1 percent.

Gonzo’s Quest has been around since 2010 and has established itself to become a NetEnt classic. As part of the game, players stand side by side with Gonzo as he goes on a quest in search of the mythical city of El Dorado. The gameboard for Gonzo’s Quest has five reels, three rows, and 20 paylines enabled. A colossal pyramid looms large in the background made up of gold, which we cannot see because of the stone symbol on the reels.

Gonzo’s Quest is a pioneer in online slot games as it was the first to feature the ‘avalanche mechanic.’ This term is now more commonly known as ‘cascading reels.’ This mechanic is what made Gonzo’s Quest the legendary online casino game it is today. 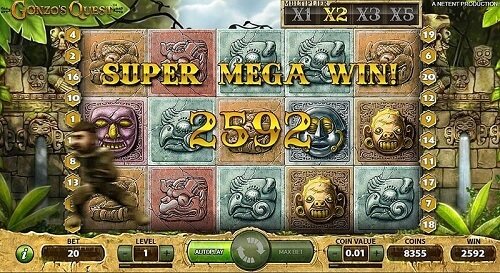 This is because, when playing the game, if you hit on a winning combination, the symbols in that combination explode. When those symbols disappear, new symbols replace them. New symbols crash down from above, which is where the term’ avalanche’ comes into play.

There is also a free spins round called ‘free falls round,’ and you can activate this by landing three ‘free fall’ golden scatters. The free spins round gives players ten free spins in total. Even though Gonzo’s Quest has been around for a decade, it is still as popular as it was all those years ago. It has fantastic visuals and an innovative mechanic, which gives you the chance to increase your winnings.

Divine Fortune is a progressive online slot game and is another one of NetEnt’s creations. Players are instantly drawn to this game as it is one of the most lucrative spin games on the market, as you delve into the world of the ancient greeks in search of a huge payout.

You will see Pegasus and Medusa brought to life as you play in the hope of winnings jackpots worth north of $100,000. If you roll three or more bonus coins, you will be taken to a unique game where some ‘mystery wins’ will unlock one of three progressive prizes. If you complete one row of coins on the jackpot board, you win a small prize. Complete two rows and you hit the jackpot. 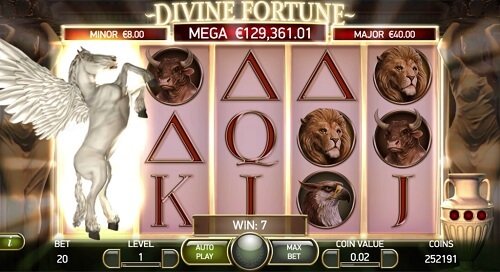 If it really is your day and you hit three rows, you could claim a massive $100,000. SugarHouse typically offers a welcome bonus for players to get their bankroll started, and you could use your deposit bonus to play on slots such as Divine Fortune.

Dead or Alive is one of the oldest titles in the online casino world, debuting in 2009 and giving players an insight into what was to come as slots began to evolve. To some who prefer more advanced features, Dead or Alive might seem too simple, and it now also has a sequel. However, we love it and believe it is as exciting now as it was when it launched 11 years ago.

This online casino title revolves around a wild west theme, so when you play, expect to see cowboy hats, sheriff badges, bounty hunters, and guns. Dead or Alive comes with some great features. During the free spins round, every wild you land on becomes what is known as ‘sticky.’ That is, they will remain for the duration of the free spins feature. This is fantastic news for the player as the wilds take the place of any symbol to form a winning combination, so the more you get, the more combinations you will land. 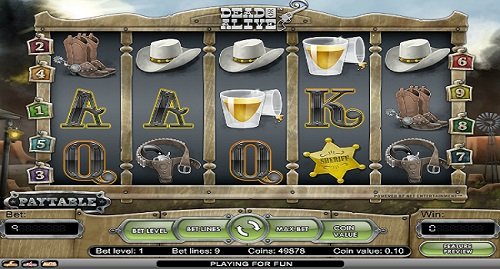 Dead or Alive appeals to those who want a retro feel to their online casino games as well as new players. It is a fantastic place to begin your gaming journey due to its simplistic nature, as there is no need to learn about how loads of features work. If you have a SugarHouse promo code, you can use that bonus and get your bankroll off to a great start by playing Dead or Alive.

Coming from providers IGT, Elephant King will appeal to those online casino players looking for a modern touch with advanced graphics and features. This video slot has several animations, including numerous paylines and payouts. On an entry-level, players will get access five reels and 40 paylines when you pay the Elephant King with a gift of $1. When the game gets going, prizes range from 2x to 500x on your line bet. 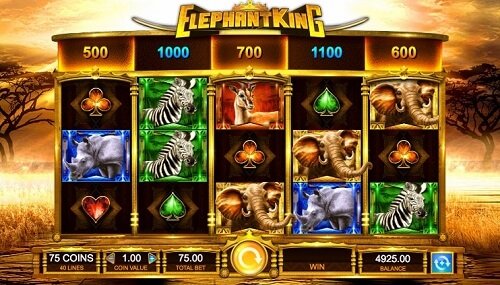 If you manage to break away from the pack, you may discover a nice bonus. If you roll in the Shield symbol, this will act as a wild and replace everything except the Golden Elephant bonus icon. All you need is one golden disk, and you will have the chance to play for an instant bonus prize.

Get three or more, and you will unlock numerous rounds of free spins where you can get up to 1,000x your line bet. With stunning aesthetics and cool features, Elephant King is a fantastic addition to the online casino industry and improves the range of slots available at SugarHouse considerably.

If you want to play slots for free with SugarHouse, you can try lots of games with the free to play SugarHouse Casino4Fun platform.

What slots payout the best at SugarHouse?

All of the slots we have listed in the article above have impressive payout rates. An RTP of around 96% is the marker you should be looking for for a good payout rate. Those who want to start playing at an online casino site can carry out some research to see which online slots have the best RTP rate before playing. Several slots at SugarHouse have a very favorable RTP rate for players.

Which slot machines have the highest RTP?

The online slot machine known to have the highest RTP is Mega-Joker, with an RTP of 99%. Other spinners with a high RTP include 1429 Uncharted Seas (98.5%), Joker Strike (98.11%), BloodSuckers (98%). You can search for which online casino sites may have these titles as part of their portfolio. SugarHouse provides a strong lineup of games and stands up well against competitors such as Rivers Casino Philadelphia.