Welcome to the future, West Virginia!

So tweeted @FanDuel on Monday after the Sportsbook officially launched in the Mountain State, just in time for WVU football – the Mountaineers’ season opener against James Madison kicks off at 2 p.m. this Saturday.

For online bettors in West Virginia, the launch ends a near six months wait following the failure of the short-lived BetLucky app, and even better news is that they will very soon have a choice as DraftKings is close to launching its sportsbook too.

FanDuel is licensed in WV through its partnership with The Greenbrier, where they have ran a retail sportsbook for almost a year. Betting handle has been minimal, however, with the property’s remote location cited as one reason. 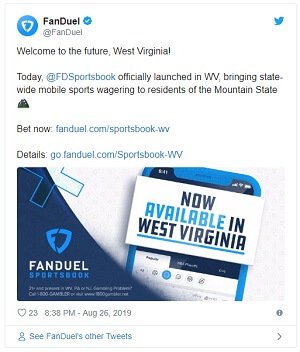 But the authorized operator can now look forward to making significant strides in the state with the portable version of their sportsbook, which is available via the website (www.fanduel/sportsbook-wv) and Android/iOS devices. Encouragement for that happening is provided by the success of their existing platforms in New Jersey and Pennsylvania.

The latest figures from NJ, where they dominate sports betting and produced revenue of $7.3m in July, and neighbouring PA, where they are well on their way to a similar position after going live late last month, have the percentage of handle being generated online as high as 85%.

And West Virginians who download the FanDuel app and start looking at the weekend matchups won’t fail to be impressed with the look and feel of it, not to mention the generous promotions on offer to them.

For starters there’s up to a $500 refund (in site credit, T&Cs apply) if you lose your first bet, while you can also expect daily Odds Boosts – enhanced odds on specific games – and money back specials based on what they are already offering bettors in NJ and PA.

As you’d expect all major US leagues are well covered and, via the homepage left-hand A-Z, you can also find some of the less popular sports such as cricket and darts. The total number of different markets for each sport is truly impressive – ‘if you can dream it, you can (probably) bet it,‘ so says their website.

What’s really neat, though, is their Live Betting option, which allows users to bet in real time as the action unfolds and with odds changing dynamically. No more waiting at the casino kiosk to get your in-game bets on then, rather a couple of clicks in the palm of your hand. Bets are settled quickly too as soon as the outcome is known.

As you can tell, we’re huge fans of the FanDuel app and you can read our full review here.

Good luck all you WV bettors and go Mountaineers!

Tiger Woods was injured in a single-vehicle car accident on early Tuesday morning, sending the…

The Minnesota Timberwolves have fired head coach Ryan Saunders after a 7-24 start, the team…