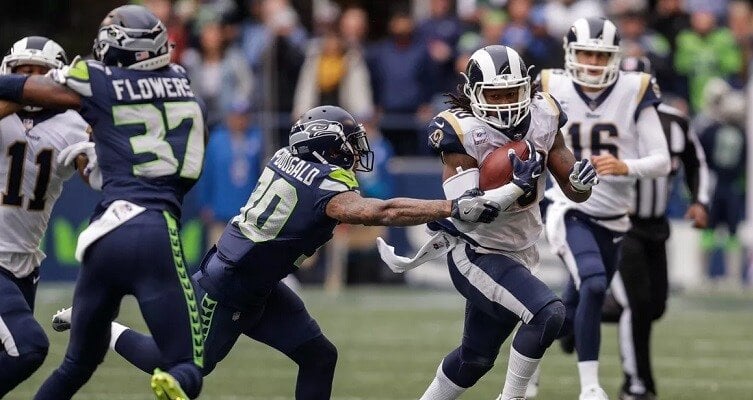 Week 4 of the NFL season was one of the wackiest and most unpredictable weeks in recent memory. There were upsets throughout the league, and some of the best teams had to wait a while before they could exhale in victory.

With all of the craziness, I say bring on Week 5. This week adds more byes into the system, with the Detroit Lions and Miami Dolphins getting the week off.

Our Thursday night matchup is shaping up to be a good one and may be one of the most important games in the battle for the top spot in the NFC West.

The Los Angeles Rams will be traveling up to the Pacific Northwest to take on their division rivals, the Seattle Seahawks.

Both these teams were early-season favorites to be huge playoff contenders, but we will help break down the matchups to determine the best bets.

Is There Something Wrong With The Rams?

The Los Angeles Rams had a tough Week 4. They were home against the Tampa Bay Buccaneers, and the Rams were a surefire lock to win this game and win it big.

But Jameis Winston and the Bucs had other ideas though, blitzing the Rams for 28 first-half points and finishing the game with a franchise-record 55 points in a 55-40 upset victory.

Goff has six interceptions in four games and has really hurt the Rams, costing them the win against the Buccaneers. Goff started this season receiving a huge extension to his rookie contract, but he is still struggling to maintain consistency.

The Rams defense has struggled as well. Besides giving up 55 points to the Buccaneers, they have not yet been consistent either.

Consistency is what we are waiting to see from the Rams, but they are still 3-1 for a reason and boast a balanced attack on both sides of the ball.

Can Seattle Return To Its Former Glory?

Seattle also enters this game boasting a 3-1 record. The Seahawks have quietly been securing victories without much problem.

Granted, they have the opposite situation of the Rams, because they have played three winless teams so far and have yet to be tested in their victories.

This Thursday night matchup will prove as the ultimate test for the Seahawks, and how they play in this game will help determine how they will look for the playoffs going forward.

Seattle’s run game has been strong with Chris Carson and C.J. Prosise splitting carries for the Seahawks. Carson has had a problem holding on to the ball with fumbling, but overall he’s been a consistent back.

Russell Wilson has looked like an MVP so far and has yet to have a turnover this season. Wilson will be the horse that this team rides until the end of the season, and the Seahawks will go as far as Wilson will be able to take them.

This game likely would have had the Rams favored on the road if not for their loss last week, but this game is currently set at a pick ’em.

Going into Seattle is never an easy feat, and that crowd will be rocking Thursday night to try and gain the edge over the defending NFC champs.

I like Wilson in this matchup to go out and try and outpace this high-powered Rams offense. Take the Seahawks in this game to win at home, as I feel like their home-field advantage will prove to be the difference to secure them the win.

Make sure to lock in your bets before Thursday night!